My 8th choice is Funny Money, placed by Wellow cacher Goose S, a cache Favourited by 13 other cachers so far. I sort-of got FTF on this one, the log book having been already signed by Goose's daughter Sophie, who is not registered at Geocaching.com. I had already had a quick look alone, but the co-ords were out. Once the co-ordinates were corrected I went out with my daughter Eleanor and this is what Eleanor (then aged 4) found; 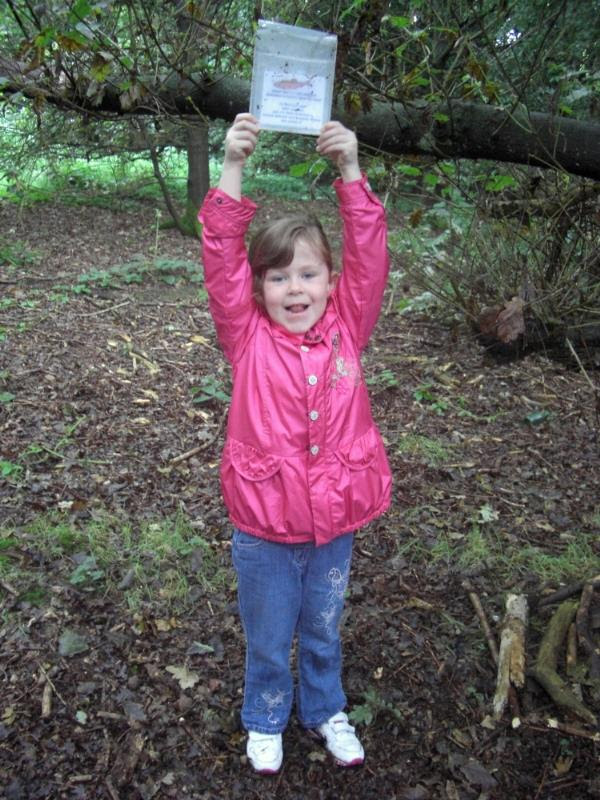 ﻿Not the cache, but a fiendish Red Herring placed by Goose under the stickoflage to Eleanor's left. After some wandering around, eventually we spotted the cache, it was...
SPOILERS!!
...up a tree! Well, this was a much easier tree to climb that the one that Cone Head was hidden up, so I clambered up it and passed the cache down to Eleanor, replacing it after signing the log. After we returned home, Eleanor quickly blabbed to her Mum that "I found a red earring and then Daddy climbed a tree in the woods!" Before I had a chance to correct her about the difference between a herring and an earring, her mum Joanne went mad shouting at me about climbing trees in woods and what would happen if I fell and injured myself and a 4-year-old girl was left wandering in the woods alone... yes, Joanne is what could be considered a "half-empty" type of person!
I'd also like to mention this puzzle cache, another superbly-made hide by darrach, and a close second choice.
Posted by Slightly Tall Paul at 10:00