I was just adding up how many First-to-Finds I had made and figured as I hadn't posted on here this week, it might make interesting reading. As always, Your Milage May Vary!

Oddly enough, I almost had a First-to-Find with only my second cache. I had made the decision to look for just one cache a day, and after finding one of Angellica's local hides on Day 1, I spotted an unfound cache in Samson Woods, Calverton Branch Line 7 to go for on Day 2. A slim dark-haired woman with a boy passed me just before I reached the cache and I'm 99% sure that was First Finder Sephora and her son, so I missed the FTF by less than 10 minutes.

My eventual first FTF came on Day 29, with Sam's favourite places #3. What made this one more satisfying was beating Chesterfield cachers cats-eyes. I've since met Ginny and Dave and they're really nice people, but to a newbie that I was at the time, they really appeared to be hogging all the FTFs!  Speaking of cats-eyes, I'd noticed that they always started their FTF logs with Yabba-Dabba-Doo, so I had to think up a FTF catchphrase of my own, but all I could come up with on short notice was EFF-2-the-TEE-2-the-EFF!! Well, it serves it's purpose I guess ;-)

Oh, and another good thing about this cache is that the owner, dog-walker had left a nice certificate for the FTF; 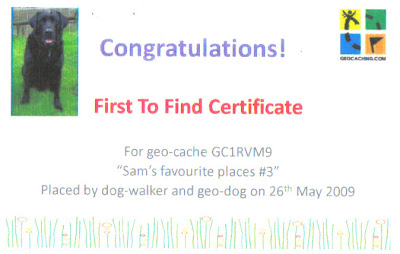 I really ought to make some of those up for my caches, they're better souvenirs than FTF badges.
FTF number two arrived on Day 52, when before leaving for work I noticed a new cache from Carlton cacher Jacaru named No Tracking Here!. A nice simple find.
I had decided that I wanted to find a cache in Lincolnshire and so had checked to see if there were any unfounds in Lincs. I spotted an new puzzle cache that involved song lyrics, which I recognised instantly. A couple of minutes work on google had the rest of the puzzle solved, but I had to wait until the following day to bag the cache, FTF on July 2nd of Mary-Jo-Lisa, a fantastic well-stocked ammo can cache. Amazingly this cache was not found again until September 18th.
FTF no.4 was Baggers Bounty Bonanza #7 - Level Crossing part 1. I could have FTFed the entire series, but I was sticking to my one-cache-per-day rule at that time. Three days later FTF no.5 was Baggers Bounty Bonanza #6 - Barking Mad. This one had been muggled before anyone had found it, giving me the opportunity to bag FTF on the replacement cache!
FTF no.6 came more than a month later, but was very close to the previous one, Ling's Corner being further along the same trail as the Baggers' series.
The very next day I bagged FTF on Bridgford Hall at 4 am!
FTF no.8 made 3 FTFs on 3 consecutive days, Sound & Vision. I had actually tried another nearby cache earlier in the day, but had been put off by a combine harvester. If I had found that cache, then I couldn't have done this one due to my one-cache-per-day rule!
FTF no.9; Tri-County (1)
FTF no.10; Queen's Hotel. I'm still a little proud of my log for this one. The next finders took the cache home with them!
FTF no.11; Motte and Bailey. At this time Deceangi was regularly publishing caches very late at night which meant that I could get some effortless FTFs on my way to work. Simples!
FTF no.12; Busby's Box. Well, that's what it was originally named.
FTF no.13; Wellow Woods Nature Trail #4. Anyone who has done this series will know how tricky these caches are, especially when they were first placed as some of the co-ords have since been amended. A fantastic series though; Recommended by STP!
FTF no.14; Wellow Woods Nature Trail #9. What a nightmare this one was, and yet when found one could only think "How could I ever miss this one?!". This was a joint FTF with The Detectorists, and here's a picture of them with my daughter Eleanor; 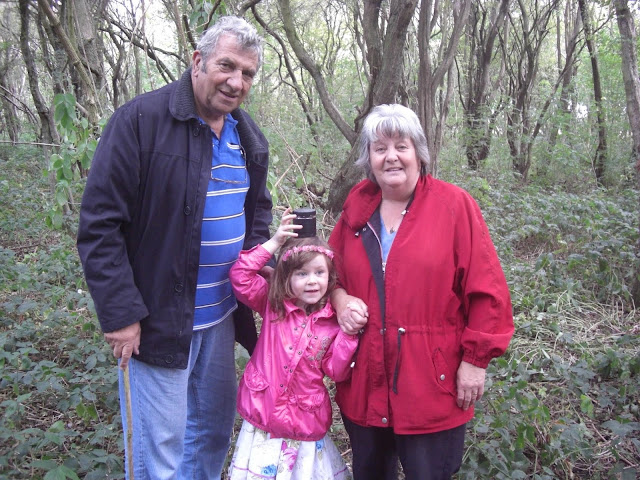 Well, that's the first 14, more to follow tomorrow.
Posted by Slightly Tall Paul at 22:36 No comments:

Anyone for a TB race starting in July?

Plans for my knockout Travel Bug race are on hold until the 2009/2010 EmCache TB Race ends, when I'll have more time to devote to it, but in the meantime I've entered the July Travel Bug race at TravelBugBaja and I'm trying to drum up some more entries.
The rules are simple, all you need is a Travel Bug Dog Tag attached to a hitchhiker with wheels. I've used an old Matchbox truck: 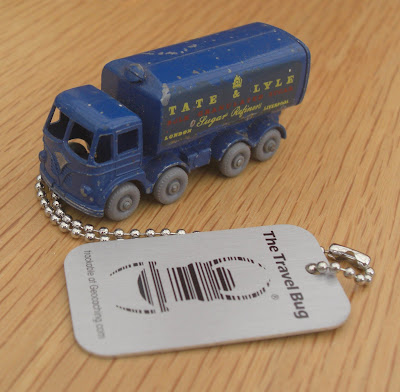 The great advantage of this race is that any cacher anywhere in the World can play, because your milage starts from the first cache that you put your Bug into in the three or four days after the race starts on July 12th. This means that cachers from the UK or US or Germany or anywhere else can all compete on equal terms without having to deliver their TB to a specific starting cache or event. Race On!
Posted by Slightly Tall Paul at 19:54 No comments:

Anyone for a Travel Bug race?

Followers of my other blog, EmCache Race will be aware of my enthusiasm for Travel Bug races! That particular race has a set finishing date, but has run into various problems due to a lack of foresight regarding the rules prior the start.

I'm thinking of starting a race organised by myself, with the following rules;

1. Only Travel Bug Dog Tags with hitchhikers attached allowed. Reason: Each entry will be equally attractive to viewers of the cache page, and anyone retrieving the TB would receive the same icon. This would stop someone entering an unusual GeoCoin which would attract the attention of icon-hunters.

2. No-one with an entry in the race would be able to move any entry, including their own. Reason: No-one would be able to help their own entry of hinder anyone else's. This would not stop anyone creating one or more sockpuppet-type GC accounts in order to move their own TB along, but hopefully cachers will play the game fairly.

3. Only the first move by a cacher will count. Reason: This will not stop "dippers" from doing their thing, but it does mean that only their first dip counts.

4. All Travel Bugs must have a picture on their page. Reason: So that a "badge" can be made so that the race positions can be easily checked. Help will be given to any cacher unable to upload a picture of their TB.

5. A stolen/lost/muggled TB can be replaced, but the new Bug would start from 0 miles unless the original Dog Tag is found. Reason: Muggling are unfortunately part of geocaching.

Basically my idea is that the race would be a knock-out with the bug with the shortest distance travelled each (period to be determined) would be elimated until only one remains. How this would work is that if 10 Bugs were entered for the race and the race started October 1st, and the time period was determined as 1 month, then the Bug that had travelled the least distance by November 1st would be out, then the least travelled of the 9 remaining Bugs on December 1st would be eliminated until just 1, the winner, remained.
Posted by Slightly Tall Paul at 12:48 No comments:

Yikes, is it really more than three months since I updated this thing?!