Had time to stop for a cache-and-dash on the way to work this morning, so chose Help Our Heroes, a microcache hidden at a War Memorial in Mapperley, Nottingham. The Memorial (and very nearly all places in the UK have them) is a tribute to local soldiers, sailors, airmen and marines who lost their lives serving their Country, not a tribute to war itself.

A nice, simple find, and a sturdy container too, better than the usual 35mm camera film pots that are often used for microcaches. After signing the log and replacing the cache I decided to take a couple of photographs of the monument in the snow at 4:30 am. This one is without flash assistance; 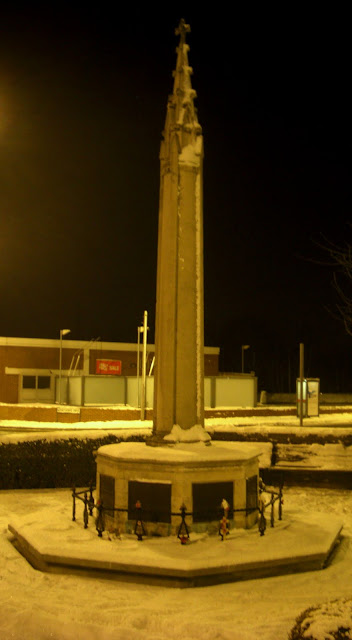 I was about to take a shot with the flash when I noticed a police car cruising past very slowly, and as it is now illegal to "be in possession of any material useful to a terrorist", i.e. any photograph of a place where members of the public are likely to gather, I decided that one snap would be enough and returned to my car.

Having had a long day at work on Tuesday, I was able to finish earlier today and so returned to Colwick Country Park to clear up the outstanding caches.

I walked clockwise around the park starting with Watch The Birdies. There are only two places that this cache could be, so naturally I tried the wrong place first! Whilst I was signing the log the birdies were watching me... 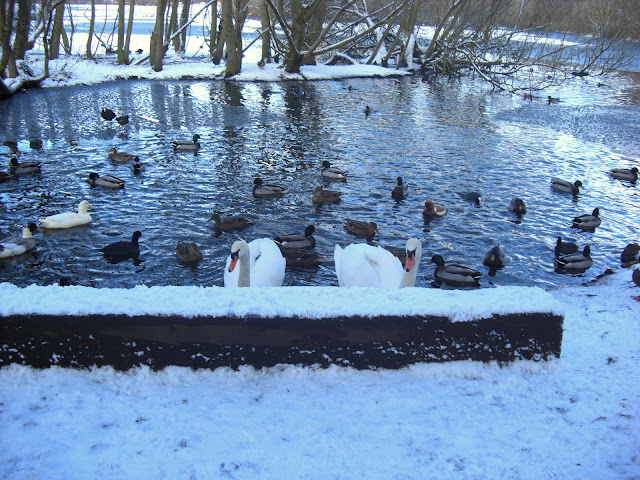 After replacing the cache it was on to The Post, a simple but sneaky hide. The lake was pretty much frozen over here; 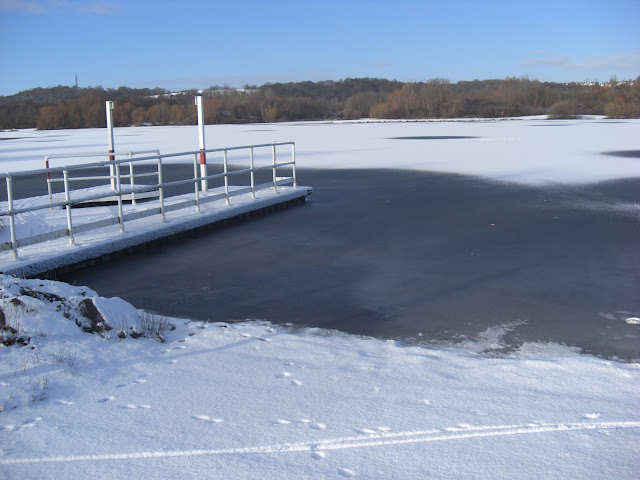 Next one around was Ship Ahoy!, an extremely easy cache to find, visible from some distance away. I hope that it stays unmuggled.

Fourth cache for today was Lakeside. A tricky find, but mainly due to the snow; I'm not certain that it genuinely rates a three-and-a-half star difficulty rating.

Lakeside turned out to be my final find for today because I couldn't find Parachute Tree, despite it being my second attempt having visited with my daughter Eleanor a few days before. After hunting high-and-low for almost 30 minutes, I decided to call it a day and head back to my car. On the way back I almost immediately bumped into Cache Owners Jacaru and Wemnog who were on their way to check the cache after a couple of other cachers had posted DNFs on it. I'd met Jacaru and Wemnog before and it was great to meet them again. They offered to show me where the cache was hidden but I refused as I would prefer to find it myself (stubborn streak!) so we exchanged Travel Bugs instead. I passed on Nigel, whom I picked up in Lincolnshire on the 3rd and grabbed G.O. Powers, a TB that was launched more than 5 years ago. What a trip, Baby! 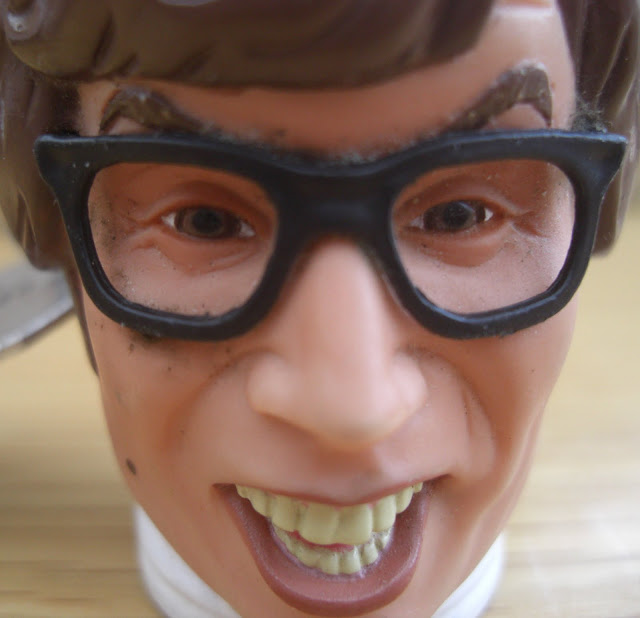 Posted by Slightly Tall Paul at 21:43 No comments:

Another day, another visit to Colwick Country Park. Due to having a long day at work I didn't arrive until 6 pm, when it was well dark and cold and with quite a bit of snow falling, but at least I didn't have to worry about muggles!

It was on with the headtorch and a short tramp through the snow to More Than Five Feet Up!. I guessed what I was looking for and found it at the third tree that I checked. A simple find really, just what I needed in this weather.
Posted by Slightly Tall Paul at 20:59 No comments:

In an effort to continue my caching-every-day-in-2010 streak alive, I stopped on the way home from work at Colwick Country Park for a crack at another one of Jacaru and Wemnog's new series of caches.

I chose Two Bridges  microcache because I could see that it was a simple cache-and-dash near to the car park.


I spotted the cache quickly and was able to retrieve it without attracting the attention of muggles by using the bootlace-tying technique. Imagine my surprise when I slid back the lid to find a perfectly clear block of ice containing the log like a fly in amber. I was so amazed that I laughed out loud. I daren't take a photograph for fear of attracting the attention of muggles, so here is a snap of a duck instead; 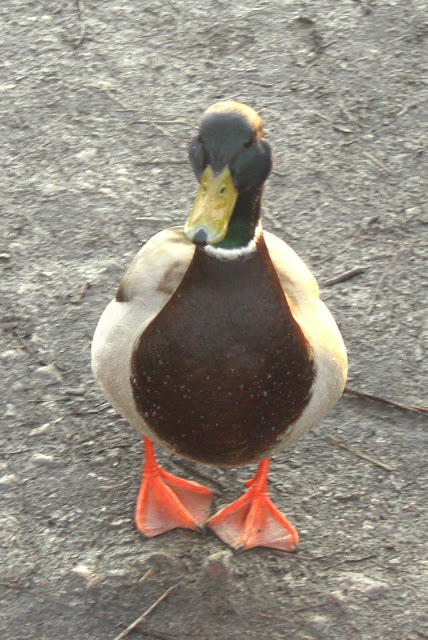 After cracking open the ice I was, again to my surprise, able to sign the moist log without problems. Total time from parking up to back in my car was 10 minutes, a real cache-and-dash!

Posted by Slightly Tall Paul at 20:33 No comments:

Eleanor wanted to find larger caches today, hopefully with more swaps in them, so I decided that a trip to Lincolnshire was in order.

First stop was the village of Welbourn where there was a new, unfound cache waiting; Welbourn Treasure Trunk, which according to the cache page contained toys.

Upon arriving at Ground Zero I quickly found a 35mm film canister with carefully hand-painted camouflage. "This doesn't look right" thinks I, and upon opening I knew that it wasn't the cache that we were looking for as it had signatures on the enclosed log dating back almost 2 years!

Nevertheless, I signed the log and returned the cache to it's hiding place, and it was only then that I spotted the actual Welbourn Treasure Trunk only 3 feet away. Our first First-to-Find of 2010! Eleanor chose a water pistol as a swap and left a racing car, and I also dropped in the Prisoner badge trackable from yesterday.

Upon checking GC.com later in the day I was able to pin down the microcache as this archived cache.

The view from up near the cache(s) was pretty good... 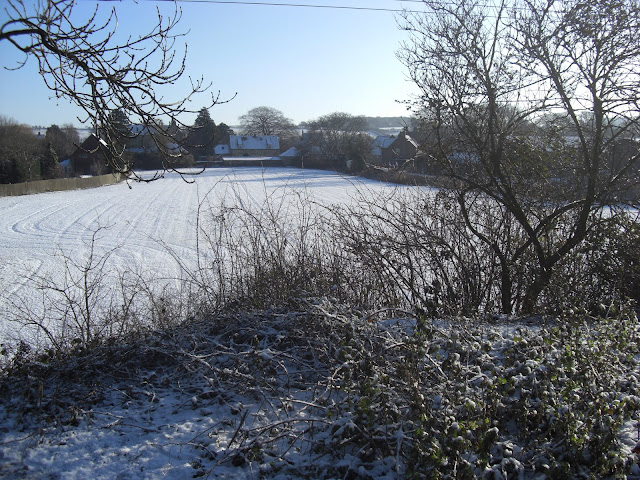 After that we headed across to Horncastle and visited a cache in someone's front garden. Yes, really! The cache is question was 'Tis the season at number 34, a huge and generous cache set by The Croft House Cachers. Read the cache page to see how generous this cache is as there are wrapped gifts for each caching team that visits plus a lucky dip for children, and a bag of swaps too. Eleanor chose the gift for us, which turned out to be a fun animal racing game, and her lucky dip gift was an elasticated wooden wonky dog. Thank You and Happy Christmas Croft House Cachers!

We left the Brumby GeoCoin from Silver Birch here and collected this attractive Travel Bug; 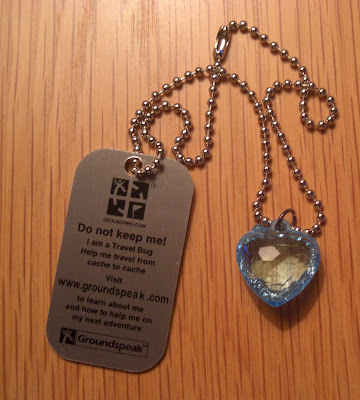 Can you guess what it's name is?

That's right, it's Nigel! Nigel's mission is to visit every mainland UK county, so having collected him in Lincolnshire, it's back to Nottinghamshire for Nigel.

On the way home from Horncastle we stopped at two quick cache-and-dashes, The Meaning Of Life which was a good cache but in a terribly stinky area. Not the usual countryside smell, but that foul landfill / dirty Biffa-bin odour. The other cache was Odder-ty (a pun on oddity I presume), another simple find on this cold day, and as previous finders had noted, home to a colony of snails (the hide, not the actual cache container!). Eleanor was happy with the swaps that she made at both of these caches, so she really enjoyed her day out, as did I.

GeoCaching in the snow

Eleanor and I went to Colwick Country Park today to attempt a new series of 14 caches by Carlton cachers Jacaru and Wemnog. As we arrived it began snowing, but we ploughed on anyway. We decided to go around in an anti-clockwise direction starting with Cradled In The Fallen Tree. Despite quite a search we couldn't find the cache so it was on to the next one, Ivy The Fence!, which we found almost immediately, although Eleanor was disappointed that it was a nano, without swaps.


The next one we tried was If You See A Crocodile. We found the crocodile easily...

Next we headed on to Parachute Tree, and again despite searching for a good 20 minutes, we couldn't find the cache.

Undeterred, we headed on to Riverside for a simple find (at last!), in fact it was replacing the cache that was tricky here as there were so many muggles around, but we managed it eventually. I left the German Frog Travel Lizard from yesterday here and collected this unusual TB... 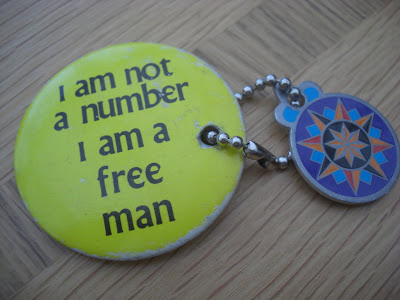 ...who's mission is to reach Lismore, NSW, Australia.

Our third find of the day was Polo Tree, another simple nano.

From there we found Silver Birch who's hide was to a cacher like a neon sign, being an unnatural looking pile of sticks. I found this great GeoCoin there... 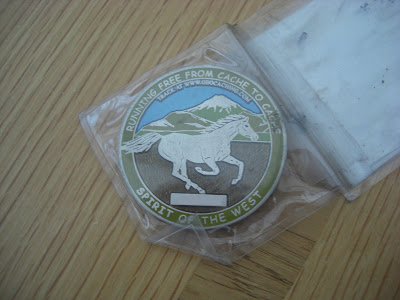 ...all the way from Australia! It's mission is to collect photographs of horses.

Eleanor (and I, to be truthful) had had enough snow and cold for today, so we headed back to the car, and were surprised to see some people searching around the Ground Zero of Cradled In The Fallen Tree. We introduced ourselves and were delighted to make the acquaintance of Skippy49 and Purplerain1275, especially as they found the cache and immediately handed it over for me to sign. Thank You for the smiley, guys! Eleanor was also happy as she got a bouncy ball from the cache, leaving a clockwork sprout in exchange.

Posted by Slightly Tall Paul at 22:50 No comments:

Did I go GeoCaching today? 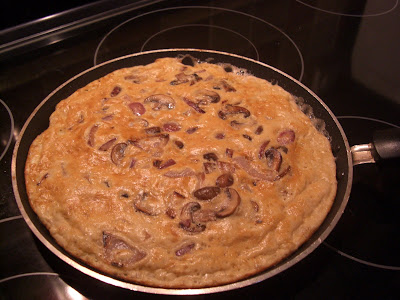 After a hearty cheese, mushroom and onion omelet (one of the few things that I can cook!) it was time to get my 5-year-old daughter Eleanor and myself togged up and out on the road.

First up today was GC1NA8V For Your Earthcache Only. As you may have guessed from the punning name, this is part of a series based on the James Bond film series, of which I have done a few in the past. Slippery roads apart, this was easy-peasy (so I cheated and read the hint, that's what they're there for!) find and it was soon back in the car and on to GC1NA8K The Man With the Golden GPSr. Again a simple find (being careful to avoid the icy stream nearby) and joy for Eleanor as she was able to swap for a doll's blanket. I collected an interesting frog Travel Lizard from Germany from here: 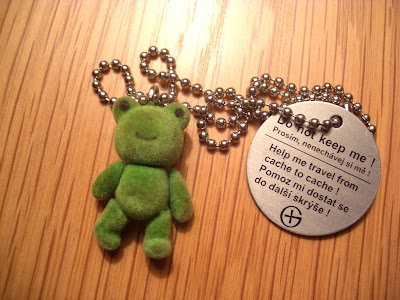 As he has no mission, I'll pop him into wherever I feel like, probably tomorrow.

Third cache of the day was Maple syrup, a simple cache-and-dash next to an interesting viewpoint. I dropped an attractive GeoCoin into this cache. I would have swapped it with the TB at the previous cache, but forgot until I was back in the car.

Fourth cache today was Curse of the FTF Notts #3 - The Junction. I decided to do this one as I had placed the previous cache in the series. It was very icy on the lane leading to the cache, and although a fairly straightforward find, it was a nightmare to replace as muggle after muggle sauntered past! Still Eleanor had fun posing with cache... 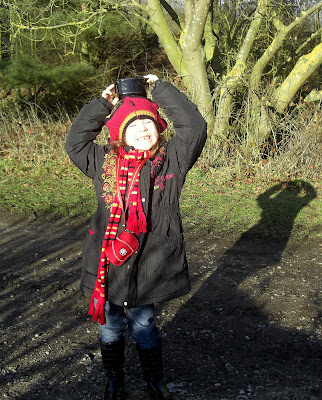 After we returned to our car Eleanor complained that her feet were getting cold, so that was it for today and back home. Eleanor wants to go back tomorrow and find more caches, so why not?
Posted by Slightly Tall Paul at 21:30 No comments: